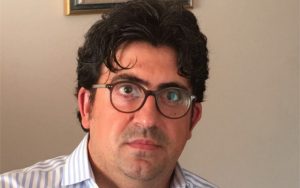 In 2003 he has won the scholarship for the PhD XVIII cycle lasting four years, deals with topological problems in regular and non-regular area, the game Theory and the Theory of Sets. In early 2004 he was a visiting student at the University of Nis, Serbia, under the scientific direction of Prof. L.J. Kocinac. With a thesis entitled “Selection principles in General Topology: relative versions and applications to the spaces function” he was awarded the title of Doctor of Philosophy in Matematics on February 2007.

In April 2010, he has won the research grant entitled “Selection Principles in General Topology” of four years in the Department of Mathematics of the University of Messina. Within this activity he has been a visiting researcher at Boise State University, Idaho USA, at the Vrje Universiteit in Amsterdam and Delft Technica University of Delft, the Netherlands, working with Profs. M. Scheepers, L. Bambinkostova (Boise) and J. Van Mill (Amsterdam). The activity in this specific area (Mat/03) is summarized in the publication of n. 19 research articles. There are numerous conferences at national and international character in which he participated and reported.

Since 2014 he collaborates with Prof. Massimiliano Ferrara at the “Mediterranea” University of Reggio Calabria. Its activity fits both in teaching and in researching. His current research interests include Mathematical Economics, Optimization and Nonlinear Analysis, Game Theory, Differential Geometry, Dynamical Systems, Partial Differential Equations, Economic Dynamics, Theory of Growth and Sustainable Development, Innovation Economy. From 2014 is a member of the dell’A.M.A.S.E.S and G.N.A.M.P.A.

This website uses cookies to enhance your visit to our site and to improve your experience.We'll assume you're ok with this, but you can opt out if you wish. Find out more.